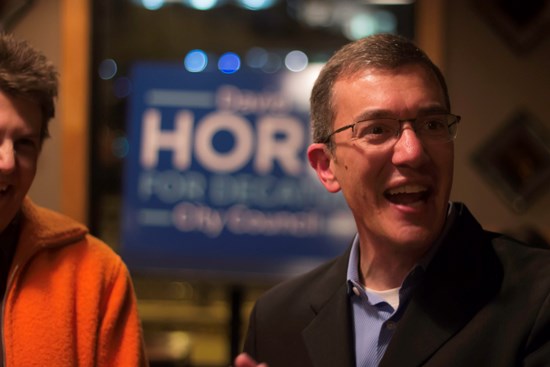 David is a strong proponent of utilizing local labor, a strong supporter of allowing adult-use cannabis businesses in Decatur, and wants to reduce the number of video gambling establishments in the city.  Below is more detailed information about David's views.

Since 2010, Decatur's population has declined over 5%.  Population decline leads to reduced economic growth, labor shortages, increased debt, and decreased city revenue to provide services.  To reverse population decline and create a livable, vibrant, and healthy city, it will take high-paying jobs, a skilled labor force, and housing.  City government can play a substantial role in housing and neighborhood revitalization to stabilize and increase Decatur's population.  One way to fund neighborhood revitalization efforts is through revenue from video gambling.  These establishments reduce the vibrancy of our city and negatively impact our citizens.  Decatur is a great place to live including low cost of living, outstanding arts programs, wonderful parks, and excellent healthcare systems.

In fall 2018, the city of Decatur had over 120 houses on the demolition list, over 300 houses that were unfit for human habitation, and nearly 4,500 vacant housing units.  A neighborhood is the foundation of its people, and it is time we make where we live a top priority.  The days of seeing boarded up houses along our main thoroughfares and side streets must come to an end, as few people are likely to move to neighborhoods with dilapidated houses.  As some neighborhoods decline and houses fall into disrepair our property values have declined.  Making our neighborhoods more vibrant and healthy can: create jobs, provide opportunities for our youth, establish a greater sense of place, and reverse population decline.

Decatur’s greatest challenge is its population decline.  Since 2010, our population has decreased over 5% and the city is one of the ten fastest shrinking cities in the U.S.  (Read More)

We must remove disparities among our citizens and create a more equitable community for all.  Decatur has been ranked as having among the highest levels of racial disparities in the U.S.  Each citizen in Decatur has a distinct identity - gender, age, ethnicity, race, culture, socio-economic class, educational background, and political view.  All of these identities should be valued and are important for our community.  Let us become a city that embraces our differences and finds common ground solutions to our long-standing issues and concerns.  Let us create a city where there is opportunity for all.  Fostering equitable relationships can: allow all voices to be heard, create a greater sense of identity for our city, and allow our citizens to thrive now and in the future.

Based on the discussion at a recent city council meeting, there is an opportunity to discuss current racial disparities in the city and how these disparities could be impacted by recent council decisions regarding cannabis. (Read More)

In 2017, some on the city council voted to cut down dozens of century-old oak trees near Lake Decatur.  Logging can increase sediment in a lake we are spending over $130 million to dredge.  Rather than logging Decatur forests, the city council should protect our beautiful forests, scenic waterways, and the unique plants and animals they contain.  The city of Decatur has an opportunity to become a leader in environmental sustainability by converting vacant lots into community greenspaces and using more renewable energy.  I will be the strongest advocate for Decatur's natural environment and improving our quality of life.  Spending in time in nature improves our health including: lower incidences of diabetes, lower incidences of heart disease, and increased longevity in seniors.

In 2017, some members of the Decatur City Council voted to cut down 114 trees to fund city beautification efforts.  Mature hardwood trees, which are inherently beautiful, are being logged in an effort to beautify the city.
(Read More)

Between 2010-2017, the city of Decatur's labor force decreased 10% and our unemployment rate is consistently higher than state and national averages.  Our city must identify and remove barriers that hinder business and work collaboratively with our partners to identify ways city government can assist in job growth.  Opportunities for our city include incentives to attract new employers and to encourage growth of pre-existing businesses, growing jobs through neighborhood revitalization, and expanding resources for start-ups.  A thriving entrepreneurial ecosystem in Decatur is critical to our long-term success.  Growing entrepreneurial opportunities can: create high paying jobs, improve the labor force, diversify the economy, and reverse population decline.

In 2018, over $113 million was put into 416 video gaming terminals in 87 establishments throughout the city of Decatur.  Overall, individuals that played lost over $29,000,000.  Video gambling does not improve the quality of life in Decatur nor does it enhance the attractiveness of our city and its neighborhoods.  If we are going to have video gambling, revenue the city receives from gambling losses should go to neighborhood revitalization efforts.  The city would benefit from a consistent source of funds for initiatives such as the removal or rehabilitation of delipidated houses and abandoned buildings.  Negative social impacts of video gambling include: addiction, bankruptcy, crime, and financial risks to seniors with fixed incomes.

The Negative Impacts of Video Gambling in Decatur

The many negative impacts of gambling are well documented and may intensify societal problems such as addiction, bankruptcy and crime.  Slots are popular among older Americans and particularly older women.

In 2017, Decatur saw video gaming become a $100 million industry.  Last year, over $105 million was put into 407 video gaming terminals in 86 establishments throughout the city.  Overall, individuals that played lost over $26 million.

Involving more citizens in the decision-making process will require greater civic engagement by the citizens and reform of the city council.  The most important step citizens can take is to vote.  Many issues that are most important to citizens are not substantively discussed by the city council, and in some cases, the council does not utilize citizen input effectively.  I will strive to ensure that the issues most important to the community are discussed and receive fair deliberation.  I am and will continue to be accessible and transparent and you can reach me at 217-358-5003.  Greater participation by citizens in our community can create a more open and transparent government, allow for better and more effective decisions, and improve our city and the services it provides.

Involving more citizens of Decatur in the decision-making process

Involving more citizens in the decision-making process will require a combination of greater civic engagement by the citizens and reform of the Decatur City Council.

I am strongly opposed to the restrictions the city is proposing, and view them as an infringement on free speech and a barrier to public participation in city government.

Working collaboratively with a diverse set of stakeholders including citizens is the best way to solve our collective challenges. This means a city government that is open, transparent, and embraces citizen perspectives.  (Read More)

SUPPORTER OF ADULT-USE CANNABIS DISPENSARY AND OTHER RELATED BUSINESSES

Cannabis-related businesses in the city of Decatur: Why the city council should not opt-out

Personally, I was opposed to the state legalizing adult-use cannabis.  Combined with smoking, alcohol, and gambling, the state is permitting activities that are addicting and have significant health and public safety consequences.  However, adult-use cannabis will be legal in the state of Illinois as of January 1, 2020 and the city council has both the responsibility and opportunity to consider how to regulate adult-use cannabis businesses to maximize their positive impacts (increased tax revenues) while minimizing negative ones (restrictions on the number of dispensaries and strict zoning).

There are many reasons the city of Decatur should not opt-out of cannabis-related businesses such as dispensaries, cultivation centers, processors, and transporters.  Here are three reasons.

Thank you for signing up!

Should Decatur name one of its downtown parks in honor of Preston Jackson?

David Horn continues to support having a cannabis dispensary in Decatur